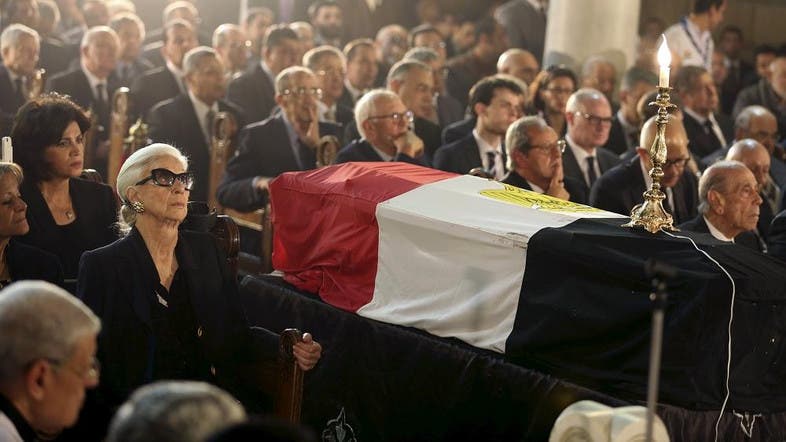 Egypt’s political and religious elite turned out Thursday for the funeral of former U.N. secretary-general Boutros Ghali, who steered the world body through several global conflicts during one of its toughest periods.

The Egyptian diplomat, who became the first African secretary-general in 1992, died in Cairo on Tuesday aged 93.

He was given an elaborate military send-off attended by President Abdel Fattah al-Sisi.

The ceremony in a prominent Cairo mosque was also attended by Sheikh Ahmed al-Tayib, the head of Sunni Islam’s seat of learning, Al-Azhar, and Coptic Pope Tawadros II.

Boutros Ghali’s coffin, draped in the Egyptian flag, was later carried to the city’s main cathedral for a Christian service led by the pope and attended by Egyptian, European and African diplomats.

Boutros Ghali remained “a man faithful to his nation... and who advocated peace at every position he held,” said Pope Tawadros II at the service.

“Egypt has lost one of its symbols, one of its best leaders, an example of patriotism,” Amr Mussa, former head of the Arab League, told mourners.

Boutros Ghali’s tenure as UN chief began in 1992 but ended abruptly in 1996 when the United States vetoed his second term.

Following his death on Tuesday, UN Secretary-General Ban Ki-moon described Boutros-Ghali as a respected statesman and scholar of international law who brought “formidable experience and intellectual power” to the top U.N. job.

A former foreign minister, the veteran diplomat headed the world body during one of its most difficult periods marked by crises in Somalia, Rwanda, the Middle East and the former Yugoslavia.

After a series of clashes with the US administration, Washington turned against Boutros-Ghali and decided to back Ghanaian Kofi Annan for the top post in late 1996.

Under Boutros Ghali’s tenure, the United Nations expanded its peacekeeping missions but a retreat from Rwanda ahead of the 1994 genocide and from the Bosnian enclave of Srebrenica a year later were seen as dismal failures.

Relations with the United States began to sour in late 1993, when a U.S.-led operation in Somalia led to major casualties among American troops.

There was also friction over U.N. sanctions against the regime of Saddam Hussein in Iraq, which had invaded and was ejected from Kuwait a year before Boutros-Ghali took up his post.

When his candidacy for a second term was vetoed, Boutros-Ghali felt that he was being punished for pushing UN member states to pay their membership arrears - an issue on which the United States has long been a laggard - and for condemning Israeli actions in southern Lebanon.

Boutros Ghali was born on Nov. 14, 1922 into a Coptic Christian family in Cairo.

He was educated at Cairo University and in Paris, where he established a lifelong connection with France.

He is survived by his Jewish wife Leia Maria. They had no children.