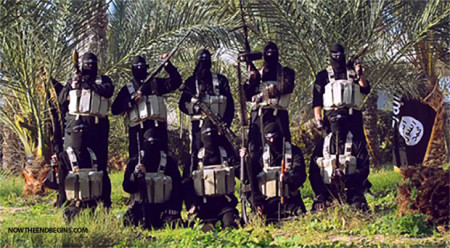 President Obama's ongoing antipathy towards Egypt is no accident. Our feckless president has long had a soft spot in his heart for the Muslim Brotherhood (MB), and Egypt's removal of the terror group from the corridors of power has rankled the administration. So what is it the Egyptians understand and our president denies? The Egyptian Minister of Religious Endowments insists that ISIS was birthed[1] by the MB.

Dr. Mohamed Mokhtar Gomaa and other Egyptian scholars have explained that while ISIS is publicly hostile to the MB, they share identical goals. Last August, the Ministry illuminated those goals. "They are both waging a war against their homelands with vandalism, destruction and murder—murder on behalf of the enemies of the state who fund them," read a published statement. Other similarities include the exploitation of women to further their agenda, and the reality that both groups use "lying and deception in the name of religion," and both have "ignorant and lying" leaders who "use religion to play with the minds of the public," the statement explained. "The main commonality between the two groups is their terrorist acts," it added.

A month later, Egyptian President Abdel Fattah Al Sisi, who pledged to support the Obama administration's war against ISIS, urged[2] the president to recognize the bigger picture of Islamic extremism that extends beyond the borders of Iraq and Syria. He cited terrorist threats in Libya, Sudan, Yemen and the Sinai Peninsula as examples of identical danger posed by ISIS. "We can't reduce the danger lurking in the region to ISIL (ISIS). We have to bear in mind all the pieces of the puzzle," he insisted. "We can't just limit the confrontation to checking and destroying the Islamic State."

Unfortunately for his nation, Al Sisi's prescience proved correct: 21 Egyptian Christians were beheaded by ISIS in Libya, where they have established another presence. Such an opportunity was made possible by the Obama administration's determination to topple Muammar Gaddafi—followed by its refusal[3] to help the new U.S.-backed Libyan government train their police and military. As a result Libya is in complete chaos. Moreover the administration's political pettiness has allegedly reached a new low: according[4] to Oliver North, Obama denied both Egypt and Jordan targeting information on ISIS in Libya and Syria, despite the decapitation of the Egyptian Christians and the incineration of Jordanian pilot Muath al-Kaseasbeh.

The administration's behavior in this context runs completely counter to the reality illuminated by Egyptian Foreign Minister Sameh Shukr. "Ultimately this extremist ideology is shared by all terrorist groups. We detect ties of cooperation between them and see a danger as it crosses borders," he explained.

PART OF THAT MIX INCLUDES HAMAS, also spawned by the MB. Writing for the Times of Israel, Ryan Mauro, National Security Analyst for the Clarion Project, wonders[5] why the world agrees that ISIS is morally repugnant even as Hamas gets a pass. "Both implement sharia governance, deliberately target civilians, have genocidal beliefs and seek the establishment of a caliphate," he writes. He further explains that ISIS's determination to exterminate Iraq's Yazidi population is "no more egregious" than Hamas's determination to eliminate millions of Jews. And the only difference between the MB, Hamas and ISIS is in regard to their method of achieving the same goal. The MB and Hamas wish to establish a Muslim caliphate incrementally, while ISIS is willing to do anything and everything to bring one about as quickly as possible.

Moreover, the MB's and Hamas's desire to eliminate the Jews is nothing new. The MB was established in 1928 by Hasan al-Banna, who admired[6] Hitler and wrote to him expressing his desire to collaborate with the Nazi Party. During World War II, the MB made good on that desire. Its members spied for Hitler in the Middle East and formed two Muslim Waffen-SS Handschar Divisions to fight for the Nazis. Following the war, the MB was supported by the West, who saw them as a counterweight to the Soviet Union's Middle East aspirations. And while some MB members eschewed violence and built schools and medical clinics, others continued to promote violence that included two failed assassination attempts against Egyptian President Gamal Abdel Nasser. Hamas was spawned in 1987 by the MB in Israel.

Two years later, the MB's Mujahedeen army repelled the Soviets from Afghanistan and then split into two groups—one of which was Al Qaeda. And as Americans are now fully aware, MB-educated Osama bin Laden became their leader. Both groups, along with other Sunni Islamists, were inspired by al-Banna's successor Sayyid Qutb. In his 1964 manifesto, Milestones, he insisted that governments not based on Sharia Law are apostate, making them legitimate targets of jihad.

ISIS HAS IDEOLOGICAL ROOTS THAT TRACE ALL THE WAY BACK TO THE WAHHABIST strain of Islam founded by Muhammad ibn ʿAbd al-Wahhab during the 16th century in Saudi Arabia. Like ISIS, al-Wahhab believed in a strict and conformist form of Islam. Those who dissented were to be killed, their property confiscated, and their wives and daughters violated. The essential rift between the two groups arises from Wahhabism's "One Ruler, One Authority, One Mosque" doctrine that refers to the Saudi king, the absolute authority of Wahhabism, and its control of the mosques and their teachings. ISIS rejects this doctrine, which explains why Saudi Arabia feels as threatened as anyone else by their rise, even as much of the kingdom still embraces Wahhabism. With the rise of Saudi oil wealth, the West preferred to look at the kingdom's modernization, even as they ignored the Wahhabist part of the equation.

ISIS's modern roots can be traced to Abu Musab al-Zarqawi, a Jordanian street thug who arrived in Afghanistan too late to fight the Soviets. After a return to Jordan, he went back to Afghanistan a decade later, meeting bin Laden in 1999, but refusing to join al Qaeda. When the Taliban fell in 2001 he fled to Iraq, and in 2003 he set up ISIS's precursor, Jama'at al-Tawhid w'al-Jihad (the Party of Monotheism and Jihad). It was comprised mostly of non-Iraqis, and al-Zarqawi's primary targets were Iraq's Shi'ite Muslim majority. By 2004 his campaign of suicide bombings in that nation made him a jihadist superstar, earning Bin Laden's endorsement in the process. Al-Zarqawi returned the favor by rebranding his group al-Qaeda in Iraq (AQI).

Yet by 2005, al Qaeda began to have misgivings about AQI's brutality towards civilians. The American troop surge, coupled with Sunni Iraq's own disenchantment with Zarqawi's strict sharia rules gave birth to the "Awakening" that allowed the U.S. to prevail in Iraq—until the deadly combination of a Shi'ite-dominated Maliki government looking for payback after years of Sunni Ba'athist domination, coupled with the Obama administration's precipitous troop withdrawal in 2011, laid the groundwork for ISIS's current rise.

In 2011, AQI was being run by current ISIS leader Abu Bakr al-Baghdadi and had become a largely Iraqi organization. Another rebranding took place as these "Sons of Iraq" became ISI, until their ranks were swelled by former commanders and soldiers in Saddam's military. With the addition of new troops, Baghdadi opened a second front in Syria, once again targeting Shi'ite Muslims and their Shia sub-sect Alawite rulers led by Bashar Assad. When Syrian became part of the equation, ISI became ISIS.

AND WHILE ALL OF THIS WAS OCCURRING, OBAMA NOT ONLY IGNORED THE METASTASIZING THREAT, but used his 2012 presidential campaign to assure the American public that al Qaeda had been "decimated" and terror was "on the run." More accurately, ISIS has been on a roll, seizing large swaths of both Iraq and Syria, along with billions of dollars, courtesy of bank seizures[7] and oil revenue[8] that make them the richest terrorist organization in the history of the world.

Moreover despite the "conventional wisdom" that al Qaeda and ISIS are enemies, the terrorist attack on Charlie Hebdo indicates there was at least some indication that al Qaeda on the Arabian Peninsula (AQAP) and ISIS worked together[9] to perpetrate that atrocity.

On 25 December, Egypt declared the MB a terrorist organization, with the Egyptian courts dissolving nearly all of its institutions, organizations and charities. By contrast on Feb. 4, Obama hosted[10] a meeting at the White House with 14 Muslim leaders, including Azhar Azeez, President of the Islamic Society of North America (ISNA), and Hoda Elshishtawy of the Muslim Public Affairs Council (MPAC).

Both groups were founded by members of the MB.

Former congressman Pete Hoekstra was incensed. The Michigan Republican insisted[11] it was "absolutely outrageous" for Obama to invite "the Muslim Brotherhood into our government to meet with the White House." "These are people who are committed to destroying our way of life," the Michigan Republican warned. "The policy failures go on and on and on, and that's how we need to be addressing this president and challenging him that his policies are just not working."

Such challenges will have to overcome that complicity, as well as the grim determination by this administration not to link terror with Islam. Both challenges are epitomized by the Summit on Countering Violent Extremism beginning today. As the AP explains,[12] the Summit will "highlight domestic and international efforts to prevent extremists and their supporters from radicalizing, recruiting and inspiring others, particularly disaffected young people."

The words "Islamist" or "terror?" Nowhere[13] to be found. As for complicity, one of the Summit's attendees[14] is the Islamic Society of Boston (ISB) an organization with extensive ties to terror,[15] including former Cambridge mosque worshipper Ahmad Abousamra who is currently ISIS's top propagandist, as well as the Tsarnaev brothers who carried out the Boston Marathon bombing. The Cambridge mosque, ISB's first house of worship was founded in 1982 by Abdulrahman Alamoudi, currently serving a 23-year prison term for his conviction as an al Qaeda fundraiser. Yusuf Qaradawi, the spiritual leader of the Muslim Brotherhood,[16] was a founding trustee at the ISB's second mosque in Roxbury.

One of the Obama administration's ostensible ideas for preventing recruitment and radicalization? State Department spokesperson Marie Harf, epitomized[17] their enduring recklessness, insisting we cannot "kill" our way to victory against ISIS. "We need, in the longer term, medium and longer term, to go after the root causes that lead people to join these groups, whether it's lack of opportunity for jobs," she declared.

Jobs? Twenty-one Egyptian Christians went to Libya in search of jobs. ISIS decapitated every one of them.

The Obama administration is morally bankrupt. And as the history of the MB-ISIS connections presented here suggests, it is only a matter of time before Americans pay an unconscionable price for that bankruptcy.

Arnold Ahlert is a former NY Post op-ed columnist currently contributing to HumanEvents.com and CanadaFreePress.com. He may be reached at This email address is being protected from spambots. You need JavaScript enabled to view it.. This article appeared February 18, 2015 in Frontpage Magazine. It is archived at
http://www.frontpagemag.com/2015/arnold-ahlert/the-muslim-brotherhood-isis-connection/