By Gilbert Reilhac and Alexandria Sage 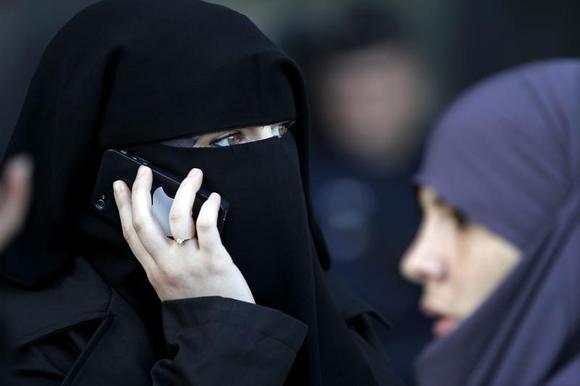 A women, wearing a niqab despite a nationwide ban on the Islamic face veil, gives a phone call outside the courts in Meaux, east of Paris, September 22, 2011.

STRASBOURG/PARIS (Reuters) - The European Court of Human Rights upheld France's 2010 ban on full-face veils in public on Tuesday but acknowledged the law could appear excessive and feed stereotypes.

Judges at the Strasbourg-based court, by 15 to 2, said the ban did not violate religious freedom and aimed to ensure "respect for the minimum set of values of an open democratic society" which included openness to social interaction.

Judges at the Strasbourg-based court, by 15 to 2, said the ban did not violate religious freedom and aimed to ensure "respect for the minimum set of values of an open democratic society" which included openness to social interaction.

In their ruling, which cannot be appealed, the judges "accepted that the barrier raised against others by a veil concealing the face in public could undermine the notion of 'living together'" that France defended in its argument, the court said in a statement.

It was the first time the court has ruled on niqab and burqa veils, which have stoked controversy in several European states although few women wear them. A French Muslim woman filed the suit for discrimination and breach of religious freedom

France has both the largest Muslim minority in Europe, estimated at 5 million, and some of the continent's most restrictive laws about expressions of faith in public.

Amnesty International said in a statement the ruling was "deeply damaging", representing "a profound retreat for the right to freedom of expression and religion."

But Abdallah Zekri, an official of the French Muslim Council that represents most leading mosque associations in France, said the wearing of the full-faced veil was "Salafist dogma" and those who wore it transgressed the law. "I hope that this decision, which comes during the month of Ramadan, a sensitive time, doesn't become an excuse to rekindle the flame," Zekri told Reuters.

France, under former conservative President Nicolas Sarkozy, was the first European country to pass a law banning burqa and niqab garments that conceal the face in public. Belgium later followed suit, as did the Swiss canton of Ticino.

Authorities said the full-faced veil is a security risk, preventing the accurate identification of individuals, and the law made violators liable to pay a fine of 150 euros ($216) or attend lessons in French citizenship.

In his arguments before the court in November, the woman's British lawyer Ramby de Mello said his client felt "like a prisoner in her own country," calling the full-faced veil "as much part of her identity as our DNA is of ours."

The court said the blanket ban affecting what the government estimated in 2009 were 2,000 women wearing the full-faced veil in France "might appear excessive."

"A State which entered into a legislative process of this kind took the risk of contributing to the consolidation of the stereotypes which affected specific groups of people and of encouraging the expression of intolerance, when it had a duty, on the contrary, to promote tolerance," wrote the court.

But it said that France had "a wide margin" in implementing the European Convention on Human Rights in respect to this "general policy question on which there were significant differences of opinion."

Rulings by the court cannot be appealed and signatories must comply or risk exclusion from the Council of Europe.

The ban enjoys wide support among non-Muslims and even among some Muslims opposed to the strict interpretation of Islamic beliefs they say full veils imply. Critics see it as an affront to France's official secularism and degrading to women.

Last summer, a police check on a Muslim woman with the full veil resulted in two nights of rioting in the Trappes suburb of Paris, home to many immigrants of North African descent.

The human rights court has in the past given considerable leeway to member states to regulate the wearing of religious dress and display religious symbols in public.