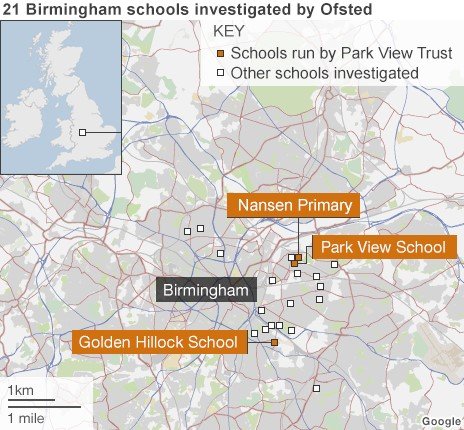 "A culture of fear and intimidation has taken grip" in Birmingham schools caught up in the Trojan Horse claims, says Ofsted chief Sir Michael Wilshaw.

Head teachers have been "marginalised or forced out of their jobs", said Sir Michael, as he delivered his findings on claims of hardline Muslim takeovers.

The Ofsted chief said there was evidence of an "organised campaign to target certain schools".

Leaders of one of the schools, Park View, firmly rejected the claims.

Ofsted has carried out inspections of 21 schools, following claims in an anonymous letter that hardline Muslims were trying to impose their views on a group of schools in Birmingham.

"Some of our findings are deeply worrying and, in some ways, quite shocking," said Sir Michael.

The five "Trojan Horse" schools - including three academies from the Park View Educational Trust - are being placed in special measures. A sixth school is also labelled inadequate for its poor educational standards.

Ofsted says that 12 schools will need to make improvements - and three have emerged with praise rather than criticism.

Education Secretary Michael Gove told the House of Commons that the funding agreements for these academies will now be terminated - with new sponsors lined up to take them over.

Local authority schools will have their governing bodies replaced.

Mr Gove says that he wants all schools to "actively promote British values", such as democracy, individual liberty, mutual respect and tolerance of those with different faiths.

He gave his backing for no-warning Ofsted inspections. Interviewed by BBC Newsnight, Sir Michael said the education secretary had previously opposed such inspections but that "minds have been changed".

Speaking to MPs, Mr Gove also called for teachers who invited extremist speakers into a school to be banned.

He also promised a review of how the Department for Education had responded to previous warnings - after claims from school leaders that they had raised concerns with ministers in 2010.

He said the problems in Birmingham stemmed from an "ideology of fragmentation".

The Ofsted reports and Mr Gove highlighted concerns in Birmingham's schools including:

He accused the council of a "serious failure" in supporting schools in protecting children from extremism - and attacked them for a "lack of urgency" in tackling concerns about how schools were being governed.

Sir Michael warned that there had been a "sudden and steep decline in these schools" - and that the inspections and talks with head teachers revealed evidence of "grave concern".

"Governors are exerting far more influence than is appropriate or acceptable," he said.

Among the examples from an inspection of Nansen Primary School is that school governors insisted on vetting a nativity play script and banned the use of a doll as baby Jesus.

It was also claimed that head teachers were being "undermined" and the curriculum was being narrowed to reflect the "personal views of a few governors".

"Some teachers reported that they were treated unfairly because of their gender or religious beliefs," he said.

Inspections had raised concerns about an exclusively Muslim culture in non-faith schools, and Sir Michael said children were not being encouraged to "develop tolerant attitudes towards other faiths".

The recommendations from Sir Michael included:

There has been an angry reaction from Park View School, which was found to be outstanding by inspectors two years ago and which is now found to be inadequate in all categories.

David Hughes, vice-chairman of the academy trust, said there was no extremism and attacked the "knee-jerk reaction of politicians".

"The Ofsted reports found absolutely no evidence of this because this is categorically not what is happening at our schools."

Lee Donaghy, assistant principal at Park View, said that the school was "part of the solution, not part of the problem".

Similarly, some parents have rejected the assertions made by Ofsted.

"We want to prove allegations by Ofsted are wrong," he said.

Abdul Khan - a father of two children who attend Park View - said the Trojan Horse allegations seemed to have been "blown out of all proportion".

He said: "This 'takeover' doesn't exist at all. This has been blown completely out of all proportion. It's an insult."

Inspection reports from Ofsted and the Education Funding Agency had been widely leaked - including claims of evidence that schools had, in some areas, "taken the Islamic focus too far".

The reports found that girls and boys had been segregated in some classes and that in RE lessons some pupils studying Christian units in a GCSE paper had had to teach themselves.

David Simmonds of the Local Government Association (LGA) said it showed that "strong local oversight by local authorities is needed to spot warning signs" - with the LGA wanting schools to be accountable to councils rather than a system which was "confusing and fragmented".

Head teachers' leader Brian Lightman said: "Extremism of any kind has no place in education."

But he warned that the "constant cycle of leaks and accusations over the last few weeks will have been demoralising and damaging for students and staff caught up in this ongoing drama".