Phone: 310.641.3387 E-mail: This email address is being protected from spambots. You need JavaScript enabled to view it. 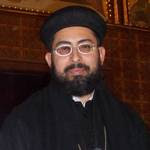 Father Mattaos Wahba, is the priest of Archangel Michael Church at Kerdasa, Geza, Egypt.  He is a pious man of God who encourages his congregation with Jesus’ message of loving one’s enemy, blessing those who curse you; doing good to those who hate you; and praying for those who despitefully use and persecute you. (Mathew 5:44) Fr. Mattaos is a model Egyptian citizen that has not ever committed a crime or seen the inside of a prison other than in the context of ministering to inmates.

Recently Father Mattaos’ life abruptly changed overnight.  He was arrested, charged and tried for aiding a young Muslim woman in getting an ID card that had falsified data indicating her religion as Christian rather than Muslim. The ID card was said to enable her to marry a Christian man and to flee the country. On October, 2008, the court found him guilty and sentenced him to 5 years at hard labor.

However, the facts dictate entirely a different story. The young woman, named Reham Abdel Aziz Rady, was born to a Muslim family. She converted to Christianity and underwent unbearable degrees of torturous harassments from her family and Egypt’s Secret Police.  She was subsequently released from custody without an ID card.  Such prevents her rightful privileges of citizenship.  She cannot get employment, rent living quarter, apply for a passport; much less apply for a marriage license.  Even, if she still possessed her old Muslim ID, it would prevent her from marrying a Christian.  There is no legal way to change the religion of a Muslim in an ID card.

In 2004, a well-intentioned person attempted to help her.  They allowed Reham to use an ID card belonging to a recently deceased young Christian woman of approximately the same age, named Mariam Nabil.  Two years later, Reham, now called Mariam, and a Christian man fell in love and decided to marry. The couple contacted Fr. Mattaos to conduct the marriage ceremonies. The priest knew nothing of the false ID and Mariam’s former Muslim background.  In good faith he conducted the ceremony and the newly wed couple fled the country.

On April 24, 2009, Mariam appeared with Brother Rasheed on the popular Arabic Al Hayat TV program “A Daring Question”.  She testified,” Father Mattaos did not have any role in getting my ID card.  I did not know him then, as this took place in 2004 and I got married in 2006.” Mariam added, “I have the right to have an ID card that reflects my true religious affiliation. The Egyptian government does not give Muslims who convert to Christianity a legal alternative to get these papers. Had I been a Christian who wanted to convert to Islam, I would have had all the help I needed.  But, because I am leaving Islam they put hurdles in my way.”

Father Mattaos did not commit a crime.  He does not deserve to be imprisoned. He is paying a price of Egypt’s present-day policy of denying religious freedom. Ironically, their policy is against the Egyptian constitution and standard human rights laws to which Egypt is a signatory. Make no mistake about it.  Father Mattaos’ imprisonment is designed to send a message to   Coptic Egyptian priests and Protestant pastors:  The Egyptian government will deal harshly with any clergyman who is suspected in aiding Muslims converting to Christianity.

We call upon officials in the US State Department; Human Rights organizations; the global community of Christian believers; and all freedom loving people to join us in our outcry.  We urge you to contact the Egyptian Embassy demanding the immediate release of Father Mattaos.  Insist in strong tones that every Egyptian citizen be granted the basic human right to follow the religion of his/her choice.

EMBASSY OF THE ARAB REPUBLIC OF EGYPT

E-mail: This email address is being protected from spambots. You need JavaScript enabled to view it.