The bridges and the man who built them 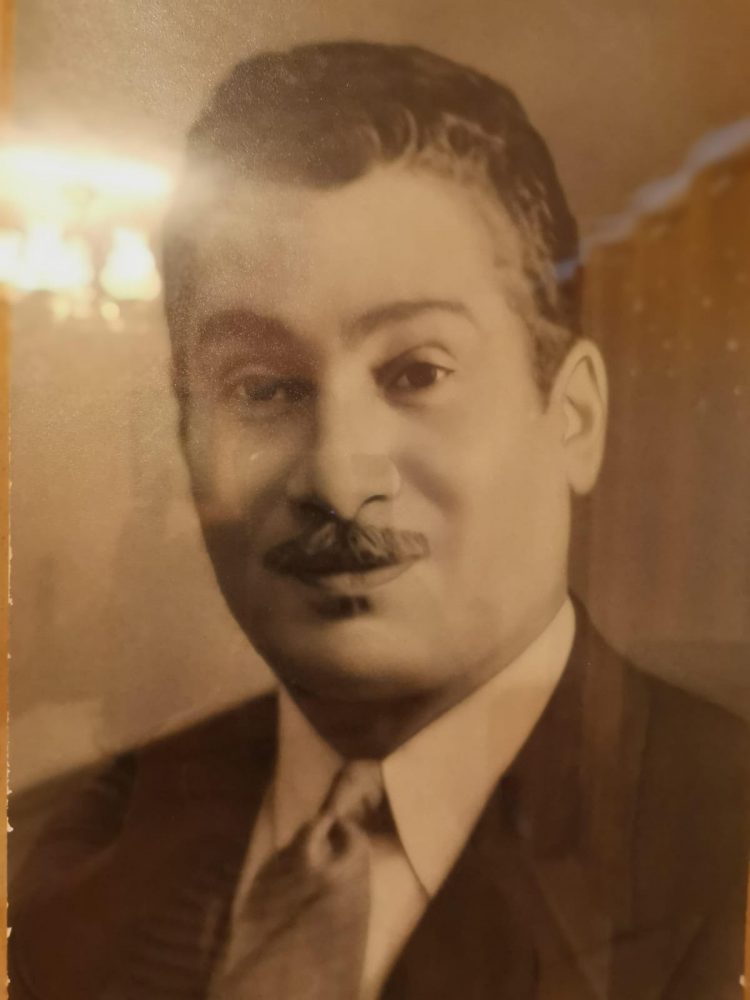 On 6 October 1973, Egyptians crossed the Suez Canal into Israeli-occupied Sinai, bringing victory to Egypt and ultimately regaining the Peninsula

Tuesday 6 October marks Victory Day for Egypt. It is the date in 1973 when Egyptian armed forces, covered by Egyptian air strikes, crossed the Suez Canal from its west bank on the Egyptian mainland to its east bank on the Sinai Peninsula which Egypt had lost to Israel during the June 1967 Six Day War. Since that time, Egyptian land of Sinai was under Israeli occupation, off-limits to Egyptians. The two armies of Egypt and Israel flanked the banks of the Suez Canal, each camping on one side, taunting one another and facing off in sporadic fire which came to be known as the War of Attrition, apparently endless but which never claimed a winner or loser. Apart from the loss of Sinai to the Israelis, the humiliating defeat left Egyptians with a collective bitter sense of indignity and inferiority to their enemy of some 20 years.

Next to impossible feat

Crossing the Suez Canal into Sinai was definitely a next to impossible feat. As though the water barrier in itself were not enough, the Israelis had in 1968 – 1969 built a defence system on the eastern bank of the Canal, the bank which was then in their hand and which faced the Egyptian mainland. They named their defence system the Bar-Lev Line, after Israeli Chief of Staff Haim Bar-Lev. The Line constituted a 160km-long wall in the form of a huge sand and dust mountain backed by concrete. It was 20 – 25 metres high, the equivalent of a seven-storey building, and stretched along the Suez Canal from Port Said in the North to Suez in the South except for the Great Bitter Lake, where a canal crossing was highly unlikely owing to the width of the lake. The line was 12m wide and was constructed with an inclination that at points reached 80 degrees, making it impossible for armoured vehicles and tanks to cross or for soldiers to climb. It included a number of strongpoints with advanced defence mechanisms and minefields. Behind the sand wall were trenches, minefields, barbed wire, machineguns, troop shelters, mortar positions, anti-aircraft weapons, and firing positions for tanks. Roads were built to allow the movement of the Israeli troops along the Bar-Lev Line, which Israelis described as a “graveyard for Egyptian troops”. 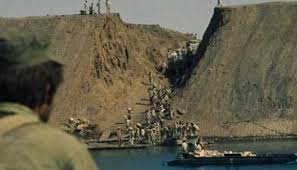 On 6 October 1973, Yom Kippur, at 2pm, the Egyptian army crossed the Suez Canal and breached the Bar-Lev line using powerful water cannons that sucked water from the Suez Canal through hoses. Simultaneous air strikes neutralised Israeli air power, securing a safe crossing for Egyptian troops. Bridges were extended across the Canal for armoury and heavy equipment to cross into the battle zone.

The Egyptian crossing of the Suez Canal, storming of the ‘invincible’ Bar-Lev line, and raising the Egyptian flag on top of the fortification, worked to regain Egypt’s self-esteem, and sense of dignity and pride, following a period of humiliating despair of Egypt ever being able to raise its head before its archenemy. 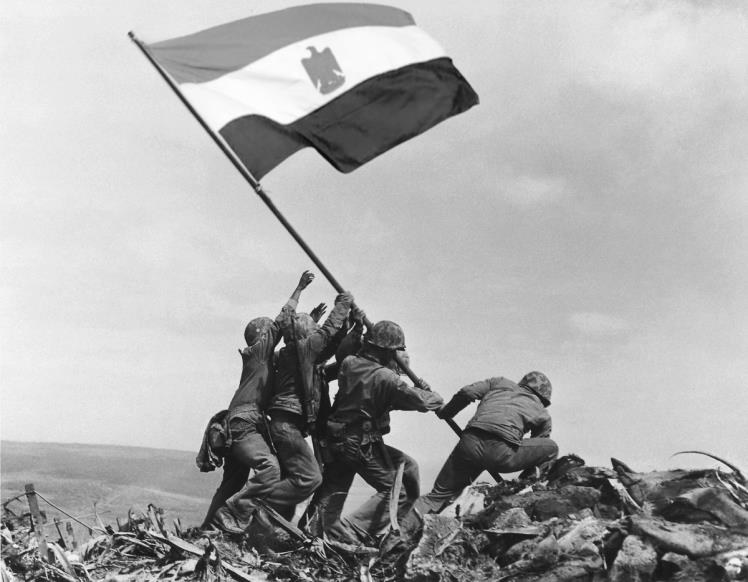 It also led to a three-week ‘tank battle’ on the land of Sinai that only ended with a cease fire agreement on 25 October 1973. But most importantly, it led to peace talks between Egypt and Israel, which culminated in the historical peace treaty signed at Camp David in 1979.

This in itself came after numerous diplomatic hurdles were arduously surmounted; endeavours to overcome them involved a trip in 1977 by Egypt’s President Anwar al-Sadat to Tel-Aviv during which he spoke to the Israeli parliament and reached out for a final peace between the two countries. The visit was an amazing first; the two countries had never spoken to each other since Israel came into existence in 1948. The peace agreement was finally brokered by US President Jimmy Carter in 1979, and on its account both President Sadat and Israeli Prime Minister Menachem Begin were jointly awarded the Nobel Peace Prize in 1978.

The agreement guaranteed that there would be no more wars between Egypt and Israel, and the full return of Sinai to Egypt.

It is a well-known fact that the hero who masterminded the Suez Canal crossing and breach of the Bar-Lev line was the engineer Major General Baqi Zaky Youssef.

But few people know that it was another Coptic construction engineer who designed bridges to be used for the crossing. He was Rassem Habib Bedwani, born on 29 April 1912 and passed away on 23 February 1994.

Rassem Bedwani was born in Cairo to a prominent Coptic family that originated in the Sohag city of Tahta some 400km south of Cairo. His father, Habib Bey Bedwani, was an irrigation engineer and held the title of Bey; his mother, who had the official title of Hanem, was Helana Hanem Wassef, sister of Wissa Pasha Wassef (1873 – 1931) who was Speaker of Egypt’s House of Representatives in March 1928 – July 1928 and in January 1930 – October 1930. Wassef was the Habib Bedwani’s maternal uncle. 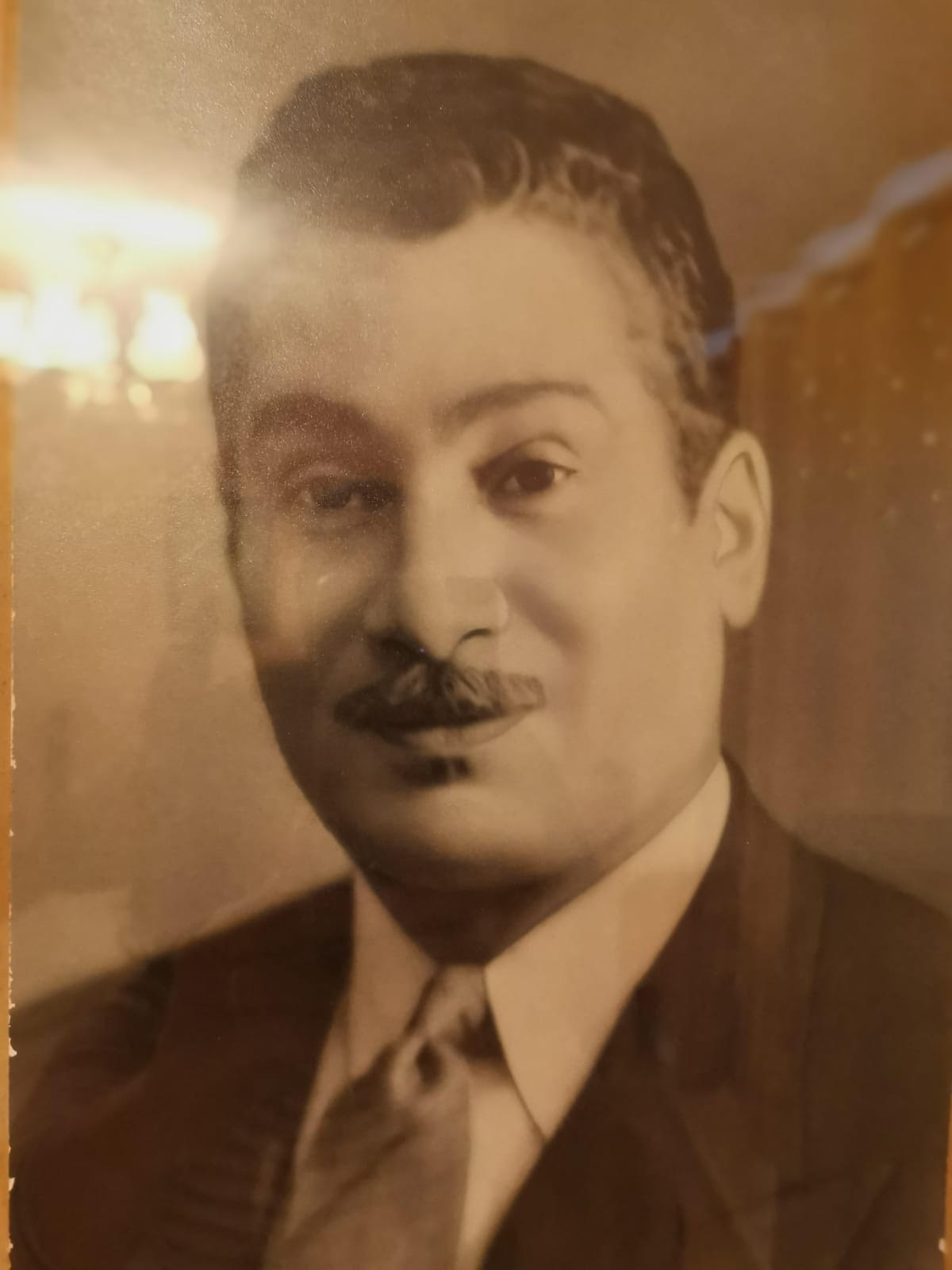 The Bedwani family home in Upper Egypt is today the headquarters of Sohag Bishopric, having been donated to the Church by the senior Bedwani.

Rassem Bedwani’s childhood was spent in the district of Sakakini in Cairo. In 1966 he built a house in the Cairo eastern suburb of Heliopolis, where he lived with his family until he died, and where his two sons grew up till they left Egypt. Amgad, a doctor, settled down in the UK where he is consultant with the NHS, and Ashraf is an engineer in Toronto, Canada.

In 1955, Rassem Bedwani earned a doctoral degree in Engineering from the Sorbonne in Paris, his dissertation being on movable bridges. He was General Manager of a major public sector construction company: the Nile Company for Roads and Bridges.

Dr Bedwani designed and built a number of important bridges in Egypt, among them the movable bridges across the Nile in Sohag and in Dumyat (Damietta) on the north east tip of the Nile Delta where the Nile flows into the Mediterranean. He also built all the bridges on the Cairo Alexandria agricultural road, and supervised the renovation of Cairo’s famed Qasr al-Nil bridge, changing and upgrading its movement apparatus.

In addition to his public sector work, Dr Bedwani worked independently from home; his son Amgad remembers him using the dining table for his engineering drawings of the bridges he designed. Dr Bedwani used to work with the notable Egyptian construction engineer Michel Bakhoum with whom he was friends, and who used to consult with Dr Bedwani on movable bridges in projects he handled.

Bridges for the crossing

With his background in designing and building bridges, it should come as no surprise that Dr Bedwani designed bridges used in the October 1973 crossing of the Suez Canal by the Egyptian army. This was an intricate feat, seeing that the Canal is 180–220 metres wide and some 18 metres deep. 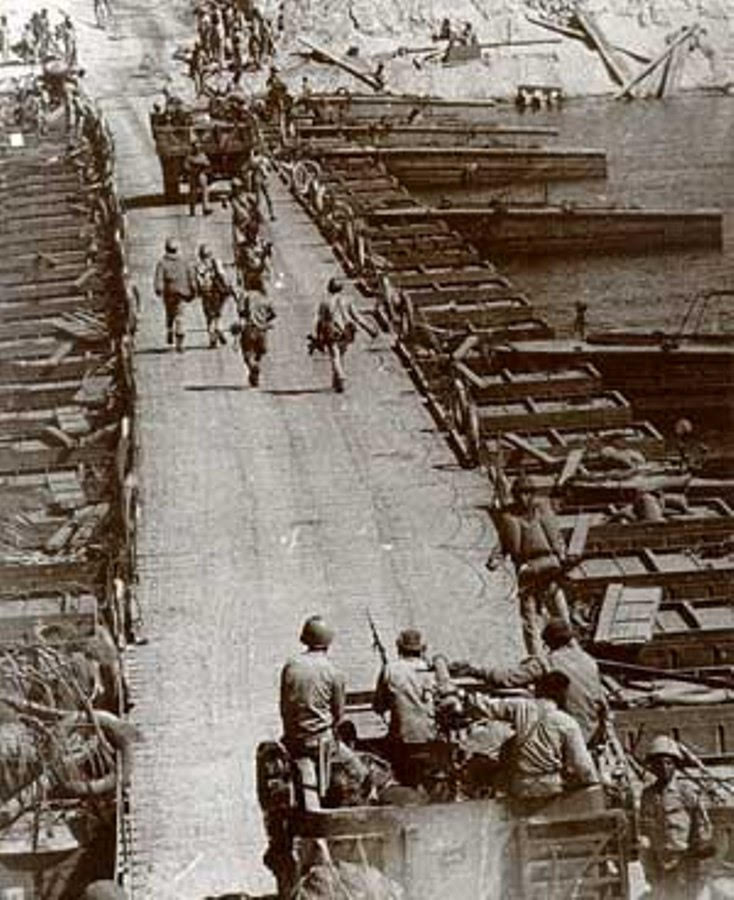 The bridges would carry troops, armour, ammunition, tanks, and military equipment. They had to be sturdy enough to withstand the heavy moving loads that would cross over them, and the strong water currents underneath. It was imperative that they should be set up in record time since the crossing operation was in essence a race against time. They would be targeted by enemy fire, meaning that they should be so designed as to allow repair of any damage or replacement of damaged parts in minimal time. Not only that, but the design and building of the bridges faced huge constraints given the local non-availability of some of the materials and steels required, and the need for special processing. Many of these constraints were resolved in conjunction with the local steel producer and relevant engineering industries.

The crossing operation called for ten heavy bridges, five light bridges, and ten pontoon bridges. Of the heavy bridges, the Egyptians had two Soviet-made PMP heavy folding bridges, and a number of British made ones but some of them required changes to be made. The remainder were made in Egypt. Junctures were also made to join the different types of bridges,

The Israeli Air Force conducted air interdiction operations to try to prevent the bridges from being erected, but they were protected by Egyptian SAM batteries.

For his exceptional work on designing and building bridges without which the crossing of the Suez Canal would never have been possible, Dr Bedwani was honoured by President Sadat with a medal and a certificate of appreciation.

We lovingly remember all who contributed towards making the Suez Canal crossing a success on 6 October 1973. They willingly offered their very best to bring dignity and peace to Egypt.

Watani wishes all Egyptians a happy commemoration of a great day that should act as an inspiration for further accomplishment of near-impossible deeds.